If you have selected the mobile or non-css viewing style by mistake, please select this link to jump back to the default view and start again.

We know it’s not even Halloween yet, but the countdown to Christmas and New Year is officially on. That means 2018 is fast approaching, and with it comes a whole new year of exciting motorhome models and developments in the industry. If you’re on the hunt for a new motorhome, we want to make sure you know all about the upcoming models from the top manufacturers.

The likes of Hymer, Chausson, Auto-Trail and Dethleffs have all updated their existing ranges, as well as introducing new models ready for you to take advantage of. So, if you were hoping to wait until the new year to invest in a new motorhome, you’re in luck. 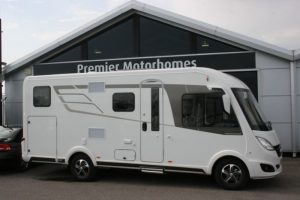 Hymer is celebrating its 60th anniversary, which means the launch of new models to add to its already impressive collection. January saw the release of anniversary models of the Hymer ML-T and Hymermobil ML-I 570, but that’s not all that’s new.

There are significant upgrades to the Hymer Exsis range; weight reductions mean that this range comes under the 3500kg threshold and can be driven by anyone with a standard car license.

The new Hymer Exsis-I 588 and Exsis-t 588 models became available in the summer of this year, with new layouts following in February 2018.

Chausson have also introduced some new concepts for their 2018 line of new motorhomes. The 716 is completely new, while the 711 and 640 are developments of existing layouts to bring you something refreshing for the new year.

There are also 4 new models that include a smart lounge concept, which features a slightly different seating area. The 716 includes a children’s den, making it popular for travelling with the younger generation. You can also lower a set of bunk beds electronically; a feature unique to Chausson and the motorhome industry.

An upgraded spec level has been introduced across some models; this includes a fitted reversing camera, extra fly screens and a VIP pack with cruise control, wraparound blinds and fog lamps.

New motorhomes from Dethleffs have undergone spec improvements, as well as 3 new overcabs that have families in mind. The Trend range and Alpha range are both being extended thanks to larger overcab motorhomes, geared at bigger families. The interiors have been redeveloped to allow families to get more out of the available space, along with better storage options.

Smaller changes have also been made to 2018’s new motorhomes. The Trend range has a redesigned gas bottle locker door, a wider passageway to access the lounge easier and two more mains sockets, as well as a new washbasin and improved shower tray.

For 2018, Auto-Trail’s new motorhomes come in the form of 2 new models, complete with luxurious layouts at a more accessible price. There is also a change in body shape in Auto-Trail’s van conversions.

The 2 models have been added to the Imala and Tracker ranges, with improved layouts and even updated soft furnishings. The new Imala can sleep up to 6 with a central washroom and kitchen. It also includes a new rear panel, and better LED lighting. The new Tracker is equipped with a layout usually found in the more expensive Frontier range, with an L-shaped kitchen and twin facing settees.

The rest of the ranges have remained mostly the same, except for new media packs and updated upholstery options.